Often when patients undergo genetic testing it's usually a one-time deal. However, now that more genes are being discovered that are associated with increased risks for developing cancer the game is changing. Our patient, Susan (name changed for anonymity), had a strong family history of breast cancer. Susan's mother and Susan's mother's twin sister both were diagnosed with breast cancer in their 40s and passed away in Poland. Susan's maternal grandmother had also had a personal history of breast cancer. This was concerning to us because it appeared that a genetic mutation could be the explanation for the familial cluster of breast cancer in Susan’s family. Susan was tested in 2010 for mutations in the BRCA1 and BRCA2 genes. Her test results came back completely negative. We still screened Susan closely because of her high risk based on her family history. As time went on, more and more genes have been determined to have an impact on cancer risk. Now genetic testing encompasses many more genes. We decided to offer Susan a panel test that would look at 14 genes associated with breast and gynecological cancer. Susan now has Medicare which will NOT cover genetic testing for individuals who only have a family history of cancer. Medicare only covers the cost of genetic testing for individuals who have a personal diagnosis of cancer and who are considering surgical decisions to reduce their risk. Susan was very concerned about her risks and understood that Medicare would not cover the cost of the gene panel which can be up to $1,500. Luckily we were able to use the funds donated through InGENEus to cover the cost of genetic testing for Susan. The genetic test found a pathogenic mutation in a gene called CHEK2. This particular gene causes an increased risk for breast and other types of cancer. We were able to deduce that this mutation is likely the explanation for Susan's family history and it warrants intensive breast cancer screening, as well as testing other family members such as Susan's son and daughter. Without these donation funds Susan would not have been able to afford further genetic testing. At Stroger Hospital we see many patients who cannot afford genetic testing that would impact their personal management and also that of their family members. Our patients and our team here at Stroger are so thankful for the time and effort spent by Sharon Hower and all the other individuals who donate to InGENEus! 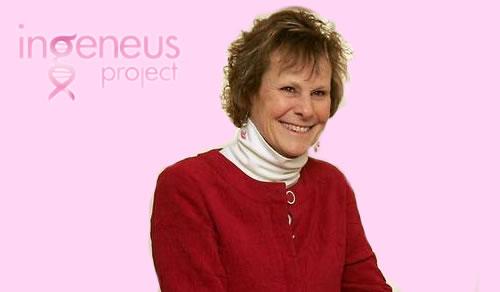 Sharon was diagnosed with breast cancer on April 17, 2007. Here is her story: I guess one could say time sort of stopped, or at least changed forever for me that day. I was considered one of the "lucky" ones, because, as we found out in the following days and weeks, my tumor was small and contained and was estrogen positive. After a lumpectomy, chemo and radiation and being put on a nasty drug that threw me into menopause, as long as I don't produce estrogen any more, I should be totally fine and remain cancer free. In the fall of 2007 my surgeon talked to me about getting genetic testing. I had no history of cancer in my family (my relatives all die of strokes and heart attacks)--so my surgeon thought it was a good idea to see if I was BRCA positive-meaning I had a genetic mutation that caused my tumor. The reason that is so important is because the breast cancer gene is also the same as the ovarian cancer gene and ovarian cancer is the "silent killer" because the symptoms are so hard to detect and it often gets diagnosed when it's in the late stages. I really had no idea what I'd do with the results if I was positive, but I thought I needed to know all the information I could to see what the rest of the life held. I also have two sisters and two nieces that I thought needed that piece of genetic information for their futures. So, I went through the counseling and decided to go ahead with the testing. I had the blood drawn and my doctor's office sent it to the one lab in the country that does the testing, along with a precertification to my insurance company saying I was having it done. My insurance company quickly sent back a letter saying that the test wouldn't be covered, so do what I'd like, but it wouldn't pay the $3200 for the test. I called the lab and asked them to hold my blood till I could figure out what I wanted to do and so I could try to fight my insurance company. I'll never forget what happened next-one of my sons, an avid ESPN watcher, was watching a special on Jim Valvano (basketball coach at North Carolina State who died of cancer and who set up a foundation before he died)-ESPN was interviewing his daughter who had just found out she carried the cancer gene and was discussing how this diagnosis changed her life-that she is now able to be proactive in dealing with her risks, etc.-my son turned to me and asked if she had just had the same test that I was supposed to get but we couldn't afford. I immediately called the lab and told them to run my test and we'd fight the insurance company. I was lucky enough to receive the good news that I was negative for carrying the gene. In fact, I wrapped up the results and gave them to my sisters for Christmas. The lab sent my bill to the insurance company, who promptly denied it, as expected. We started the process to appeal and were fairly confident that with a doctor's letter of medical necessity, I should get it covered. My doctor wrote the letter and I wrote one as well and we were informed that because I was over 45 years old (by a few months at diagnosis), and had no history of cancer in my family, I was still denied. I made phone call after phone call and as I worked my way up the ladder, various people understood my dilemma but their hands were tied I was told. One supervisor actually told me that if one of my sisters got sick, then there would be family history and the test would be covered! It was too ludicrous for words. I finally received a letter which pretty much said "stop writing and calling because this will never be covered-give up. It was at that point that my husband and I decided that this made no sense to us whatsoever-we could just imagine how many women couldn't afford to have the test done and how many lives were affected because of that. We needed to do something to help them-that's how InGENEus Project was born I guess you could say.